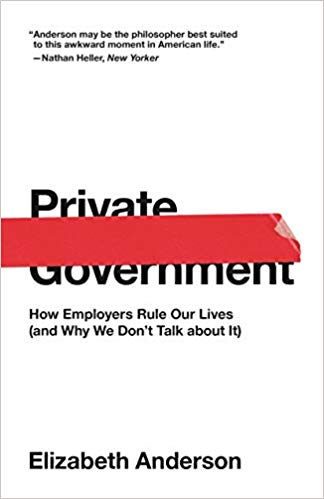 Private Government: How Employers Rule Our Lives (and why we don’t talk about it) by Elizabeth Anderson (2017)

This is a book that’s been long overdue. Anderson offers a scholarly and thought-provoking study of how corporate America is a form of private government. She discusses how the average employee in the private sector acts as if the free market still existed. The author demonstrates that the free market is a myth with the research to back it up.

Since the industrial revolution employers have made the rules through dictatorial means – invasive policies and the paycheck (and the secrecy that surrounds it) to name just a couple of tactics and decisions about the employee’s professional and personal life. And, as an employee learns early on – you fall in line.

Anderson offers a historical context and delineates the role of race and gender in the workplace among other factors. Unions are anathema to numerous corporations and businesses. And, employers meanwhile want less federal, state and local governance to allow them even greater latitude and control over the lives of their employees both on and off the job.

“In the workplace, employees can be fired for their political speech, recreational activities, diet, and almost anything else employers care to govern,” including race, religion, gender (transgender), and personal agendas. Clothing, manners and other characteristics are not off limit to the employer. Privacy doesn’t exist nor does worker freedom. Employee activities are orchestrated and sold as being in the best interest of the worker and the success of the business.

Today the United States government is essentially an oligarchy backed by an authoritarian President and his cabinet made up of millionaires and billionaires. Less government is sought by much of corporate America, though perhaps not all. Government acts as a check and balance in normal times of a thriving democracy.

The solution? If democracy in some form continues to exist then finding better ways to allow employees freedom in expressing ideas, personal space and dress, input into the workings of the business, shared responsibility and opening the dialogue including approaches to improve on the job training while alleviating discrimination in all its forms. That’s part of the solution.  Communication is key. Is that possible in this age of technology, the omnipresent camera and increasing mistrust? The United States is in the midst of one of it’s most unsettling times since the American Revolution with powerful interests scrambling for greater power and greater wealth. The future?