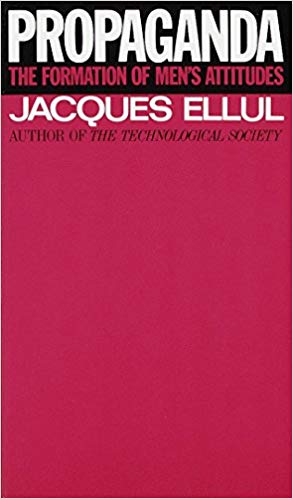 Propaganda by Jacques Ellul (1973, Propagandes; original French edition: 1962) Though this book is over 50 years old, Ellul, a French philosopher, professor, sociologist and lay theologian, focused his research on the character  and affect produced by propaganda, in the context of modern technology, particularly on people’s lives in making decisions and how they interpret the world around them.

Ellul’s approach leans towards the holistic and he leaves few stones unturned in how every person is affected by propaganda every hour of the day especially in a technological age; and this was written prior to today’s social media, digital public relations, “reality television,” digital surveillance, cyber warfare and the current state of mass communications.

Ellul writes: “Differences in political regimes matter little; differences in social levels are more important; and most important is national self-awareness. Propaganda is a good deal less the political weapon of a regime (it is that also) than the effect of a technological society that embraces the entire man and tends to be a completely integrated society. Propaganda stops man from feeling that things in society are oppressive and persuades him to submit with good grace.”

Ellul notes: Very frequently propaganda is described as a manipulation for the purpose of changing idea or opinions of making individuals ‘believe’ some idea or fact, and finally of making them adhere to some doctrine—all matters of the mind. It tries to convince, to bring about a decision, to create a firm adherence to some truth. This is a completely wrong line of thinking: to view propaganda as still being what it was in 1850 is to cling to an obsolete concept of man and of the means to influence him; it is to condemn oneself to understand nothing about propaganda. The aim of modern propaganda is no longer to modify ideas, but to provoke action. It is no longer to change adherence to a doctrine, but to make the individual cling irrationally to a process of action. It is no longer to transform an opinion but to arouse an active and mythical belief.”

The question may be – have we systematically imprisoned ourselves through our technology rather than having that technology offering us greater freedom? Ellul’s insights have chilling relevancy for the 21st century and the fine line between factual information and the deluge of misinformation and disinformation.

. Can we think we have become so “knowledgeable” that we become subservient to our own propaganda?