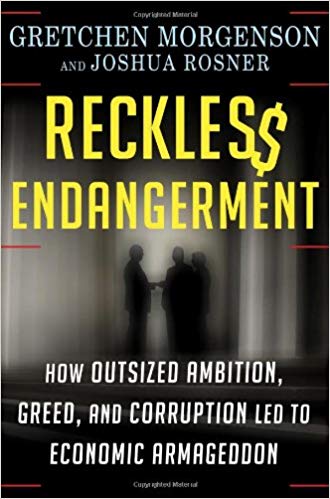 A rereading. My thoughts – as a registered political independent and being well-read after 25 years in library administration I found this work to be worth a second read during these disheveled times that portend to exceed the adaptability of an increasingly fragile democracy and the questionable translation of modern capitalism. Follow the money is a cliché though accurate along with power being an aphrodisiac. Greed and corruption rose to a different level and are not slowing down eight years after this was published.

I also had a foot in the bloody financial arena so to speak at the time. So upon reading this work a second time and walking the line between extremes I still found it to be a balanced treatment of events leading up to the crash and the character and characteristics of the participants. A careful reading allows one to discover that the authors leave no one or business in position of power, unscathed. The socialized risk of the lead players is intriguing. I am reminded of the perspective of capitalism for the poor and socialism for the wealthiest.

That is, economic equality is a nice phrase for those that have the financial wherewithal to afford it…that doesn’t mean there is no suffering among the rich but it’s minor when compared to being forced into the street – literally.  I found it to be easier to “suffer’ when I had a roof over my head and a bank account, even when fair-weather friends are missing in action. Finding one impoverished through bad and otherwise corrupt financial advice is very personal.

Morgenson and Rosner have provided a disturbing, accessible, articulate read on what happened and why that led to the financial crisis in which ultimately the taxpayers would foot the bill in some form or another.

As one reads the news of the day in 2019 and the increasing lack of oversight and undermining of regulations by the current administration the reader may ask how steep will the next climb be?