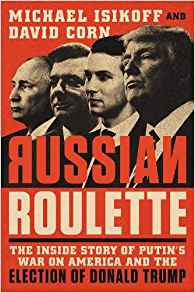 Russian Roulette: The Inside Story of Putin’s War on America and the Election of Donald Trump by Michael Isikoff and David Corn

Father Tikhon Shevkunov, the self-confident and self-serving “confessor of Vladimir Putin,” reputedly told Putin a year or two before the turn of the century that he (Putin) was on a divine mission. Putin understood and believed him. Both men sought influence and both were insecure and yet self-assured. Putin’s KGB background and oversight of political and real-time assassinations are layered with intrigue and the desire for influence and power.

Donald Trump, who was already enamored with his own reflection in the mirror, was on a mission to build his empire with his name blazoned across his buildings’ facades and where he could control people by dividing and conquering them. They were his losers. He was the winner in his mind. The problem for Trump: his intellectual and emotional immaturity concerning the US Constitution and his ignorance of  diplomacy and the cataclysmic effect of cyber warfare.

Throughout recent history countries and their agencies, reinforced by corporate greed, sought to influence the values of other countries making them pliable to do business and enhance their own corporate wealth and political stability. This report takes political influence to the level of collusion between Trump and Putin and the covering it up. What other than collusion is there that aptly fits the events and the participants?

What makes this investigative journalism so riveting is how the authors so ably weave their narrative surrounding the Russian influenced 2016 election. A full-scale cyber attack insured Trump would be elected and then set it up so that he appeared surprised by his own election.

The Kremlin manipulated the greed and narcissism of Trump to their advantage and set the stage for an unusual alliance. The sheer scope of the deceit, the lies and misinformation is troubling as we attempt to wrap our head around events, people and their web of deceit leading up and following the 2016 election within the Trump family and their followers. Fear, insecurity and greed can be powerful incentives.

A seemingly insignificant but fascinating glimpse in the machinations of the Trump’s hollow words is when he is in Las Vegas in which a small press  conference occurs. Trump points to a Russian reporter by name. She asks him a carefully worded question for which he uncharacteristically gives a carefully worded answer. What was that all about?

This work is about clandestine operations by Russia in several state elections and subsequent attacks through disinformation to get Trump elected. What makes this work valuable is the amount and quality of the documentation the authors brought to their work and the role of a source inside the Kremlin and the nature of political paranoia and the manipulations by a cast of disreputable characters.

I suspect there is much more to the story. It’s what we don’t know that is bothersome. This is a very well written, excellent piece of investigative journalism.