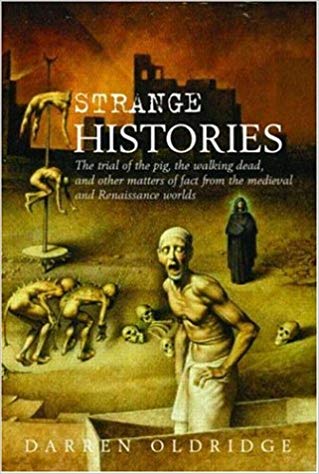 As I delve into the assorted esoteric books remaining in my library I came across this work of unusual human practices, (other than the current news).

The author offers an intriguing study of witches, angels, werewolves, heretics, persecution and local justice among people who thought they were reasonable though succumbing to superstition, fabrications, ignorance and arrogance from the medieval and Renaissance worlds and the lingering affects on today’s cultures.

The author has tried to “ to reconstruct the thinking of men and women who accepted as normal ideas that now seem to be absurd: the existence of witches and roaming cadavers, trial by ordeal, the capital punishment of animals…” and so forth…from moral arguments that suggests that “God sometimes wants people to suffer on earth, and that killing heretics is necessary and just.”

After reading I had to step back and ask myself how much have the times changed? When people are unable to discern the truth based on evidence and facts then fear makes inroads in to the human psyche. The introduction of fear is purposeful by those who wish to gain power over others.

Among other things the author examines intolerance and the effects of it on human reason. He engages the reader to look deeper than the surface of the matter. The religions of man have fed into his superstitions. What is true or false about the concept of resurrection is a fascinating examination between the ages. He introduces cases studies to demonstrate how the actions of people fit into the times in which they lived. The author examines religious fundamentalism and the labels people use to describe those at their end of the spectrum and though the labels may be emotionally satisfying the results are a misunderstanding of motives.

This is a sympathetic study of human being’s struggle with superstitions, myths,  that still linger in present day society…medieval exorcism and modern exorcism and walking spirits of the dead are examples along with extremes in beliefs and actions.

This is a thought-provoking read for the lay person and the specialist.