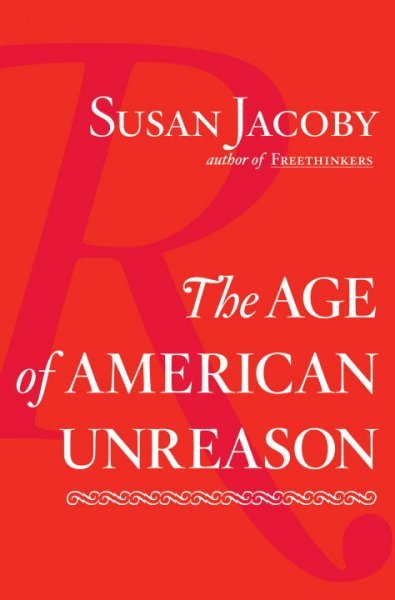 The Age of American Unreason by Susan Jacoby (2008) Prescient in style and substance Jacoby exposes the rise of irrationality and unreason in public affairs. The author as other intellectual historians have noted distinguishes the difference between the remarkable characteristics of the “Founding Fathers” in which there were a disproportionate number of learned men that helped establish this country.

My take: Today the number of truly learned individuals in positions of power are decreasing in number. Are these people of influence street savvy, greedy and political? Yes. Are they learned? No. Do they care about the people – the old man, the widow, the unemployed, the homeless or are they just the ”folks?” Our language in describing each other and the world around us affects how we treat each other as human beings and our environment.

This book is also prescient in that it places the 45th President’s existence into a context of the rise of unreason. Propaganda and doublespeak are mainstream. Human irrationality has supplanted human reason. Causes of this state of affairs are varied but roots in a video culture, religious fundamentalism and greed are disturbing.

“Americans are alone in the developed world in their view of evolution by means of natural selection as “controversial” rather than as settled mainstream science.” Religious fundamentalism, hate groups, racism, misogyny, nationalism, police state and self-entitlement are siblings of unreason to name a few. Was Nietzsche correct in assuming that hope is a hoax? Context.

The author traces the history of America and the value of knowledge. The challenges the country faced were the pseudosciences people indulged in to satisfy their insecurity, while rationalizing wealth and poverty. One is not wealthy because one deserves to be wealthy yet that’s what many a wealthy person would have you believe. (Social Darwinism)

Being able to distinguish the difference between science and pseudoscience with the “fruits of the scientific method” being set aside was part of the confusion for the man and woman trying to make a living with no safety net. The 1930’s witnessed a change in offering security for the plight of nameless faces working in factories and plowing fields and thanking their God for food on the table.

Over the course of the years and decades in displays of both intellectual and anti-intellectual indulgence there were moments that offered deeper insight into the malaise of culture and mere survival such as the 1960’s. The culture of distraction and greed that rose again with a boost of energy in the 1980’s and found a home in the 2000s. Social media have become a blessing for those seeking immediacy over knowledge and memory.

This work covers a substantial amount of territory from a significant  intellectual perspective. At times slightly dense but always revealing, whose theme is “the erosion of memory and knowledge.” The author is not optimistic.

“If a nation expects to be ignorant and free, in a state of civilization, it expects what never was and never will be” – Thomas Jefferson, 1816