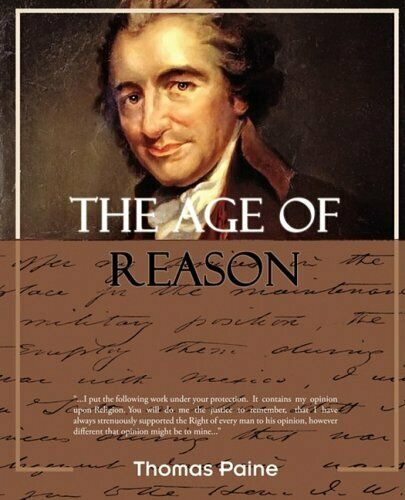 The Age of Reason by Thomas Paine

Written during the era that was characterized by scientific and philosophical enlightenment, war and revolution and moral, political, cultural, social and theological shifts, Thomas Paine, author of Common Sense along with other pamphlets wrote in the voice of the common person. There have been innumerable volumes written on this intellectually stirring work along with his Rights of Man.

The past decade has seen an increase in the rereading of The Age of Reason. It’s essentially about Paine’s thoughts on religion that are best summed up when he states several paragraphs into Part One, “My own mind is my own church.”

Paine goes on to state “All national institutions of churches, whether Jewish, Christian, or Turkish, appear to me no other than human inventions set up to terrify and enslave mankind, and to monopolize power and profit.”

The religious and theological inventions of man possess enormous power over people and when combined with money establish an orthodoxy-frame of reference. That is, wealth and power determine orthodoxy. To resist the orthodoxy is heresy. Paine understood only too intimately the downstream effects on people.

As a deist Paine, who was raised as a Quaker, did not condemn believers. He believed he had a right to his own beliefs, without judgment from others. He went on to stress that, …”it is necessary for the happiness of man, that he be mentally faithful to himself. Infidelity does not consist in believing, or in disbelieving: it consists in professing to believe what he does not believe.”

Paine cautions about revelation – a communication from God through inspiration, an angel or the Word…When revelation is applied to religion it “Means something communicated immediately from God to man.”  And, ”that something has been revealed to a certain person, and not revealed to any other person, it is revelation to that person only. When he tells it to a second person, a second to a third, a third to a fourth, and so on it ceases to be a revelation to all those persons. It is revelation to the first person only, and hearsay to every other; and consequently, they are not obliged to believe it.”

Paine’s work challenged the thinking of the day as he questioned in details the roots and the logic of the three major religions, Christianity, Islam and Judaism. By the twenty-first century caught up in major shifts in beliefs, continued wars and a rebirth of religious fundamentalism and the corporate state, Paine’s work arrives once more as a plea for reason. But, there’s danger in reason as Voltaire might suggest, ”It’s dangerous to be right in matters on which the established authorities are wrong.”

The Age of Reason has transcended the period in which it was written and is now referenced within a technological context and the “the rhyme of history” as Mark Twain might say, has visited us once again.

This is a provocative work with Part One of Two, being more salient within today’s technological context, though the entire work including a third part in 1807 are fascinating.

I recommend Paine, The Collected Writings (1984).