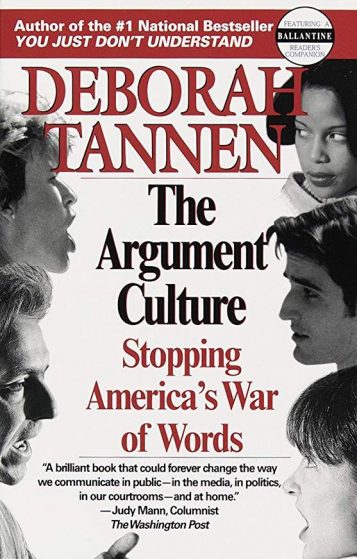 The Argument Culture, Moving from Debate to Dialogue by Deborah Tannen (1998)

Written almost twenty years ago the author sought to tackle in an original voice,  “the pervasive warlike atmosphere that makes us approach public dialogue, and just about anything we accomplish, as if it were a fight.”

The author maintained, “…in the argument culture, criticism, attack, or opposition are the predominant if not the only ways of responding to people and ideas.”

If anything that idea the argument culture has intensified today. Tannen offers some thoughtfully researched gender based examples of how we use language that intensifies the messages and words move from being no longer thought-provoking to being provocative, demanding an equal response.

Politicians, the press, social media, litigation (where lawyers over state claims) and the manipulation of facts to win with a result of groups of people denying such things as the holocaust ever happened. Though she briefly notes race issues, the nature of racism itself is skimmed over though gender bias receives needed attention, which happened to have a greater press coverage in the 1990’s than race. She focuses on the press while demonstrating the increasing cynicism about and among the me first politicians.

Language is a complicated business as linguists have repeatedly demonstrated over the decades. Anything can be said to manipulate a person’s thoughts to thinking about life contrary to the facts. Lying for the purpose of gaining an advantage over your opponent has become a natural part of a politician’s life though salespeople would argue they learned to manipulate first though it can be said that lying has now become part and parcel of our overly competitive culture and results in “whom do you trust?”

In the argument culture all aspects of life is fair game with the goal of a ‘win – lose’ proposition. The author states: “At the heart of the argument culture is the habit of seeing issues and ideas as absolute and irreconcilable principles continually at war with each other.” She offers up the idea of not thinking in dualistic terms but looking at all sides providing a set of rules of engagement to help move from debate to dialogue.

The challenge: Is our culture primed for political and linguistic revolution while politicians and the wealthy go about metaphorically and in actuality seeking ‘to cover their tails’ and all within the context of a socialism for the wealthy and democracy for the poor, meaning those without will pay a greater price?”