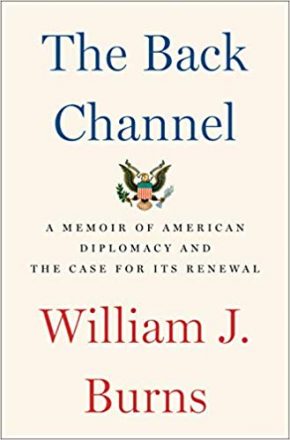 The Back Channel, A Memoir of American Diplomacy and the Case for its Renewal by William J Burns 2019

Henry Kissinger wrote in the final paragraphs of his monumental work titled Diplomacy, “the fulfillment of American ideals will have to be sought in the patient accumulation of partial successes.”

My take: We can apply that observation here. We are living in an era of human engineered political and environmental upheaval, at times deliberately mischievous. Other times our diplomatic efforts are a result of poor commination skills and not taking the time to place oneself in the other’s shoes whether Russia, Ukraine, the European Union, NATO, China and so forth.  A significant portion of the volatility in the world today is found in historical illiteracy, national and individual narcissism, the arrogance of power and the ignorance of justice and inequality, the relativization of the humane and the effects of money and corporate interests.

Burns like other pragmatic and real politic diplomats, guides the reader through the delicate and necessary work of the diplomacy in modern times. Educated and experienced in negotiations he breathes life into the negotiation process whether with Russia or Iran and surrounding the power plays behind nuclear expansion. The minefield created by an illiterate  president in shredding of foreign policy initiatives is just beginning to be realized. The challenge of follow the money is a dark area for diplomacy that dates back to John Quincy Adams. The varied political, corporate and government interests in the peace process has a price tag both monetary and human.

The author takes us on a foreign policy journey. It’s his perspective, based on evidence, though imperfect as he admits to various policy initiatives, it’s a very insightful and significant read. The options are not pretty.

At times intellectually and diplomatically brilliant, Burns gives the reader an inside look into his thought process and the nature of diplomacy itself and how very necessary it is for human and Earth’s survival.

What is the option to diplomacy? In the early part of the 1800’s Thomas Jefferson, Charles Maurice de Talleyrand-Périgordand John Quincy Adams among others surmised after the revolutions in America and France, “War? Haven’t we experienced enough?”

There are some excellent studies in diplomacy, This is a thought-provoking memoir of what is involved. A useful reference.