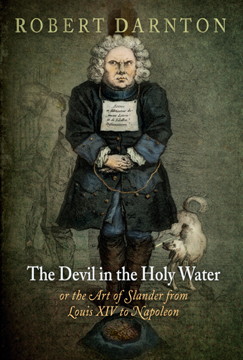 My perspective: This is an enormous book of scholarship by Professor Robert Danton, Harvard University Librarian. It’s both lengthy and substantial. The book had been sitting on my shelf for over five years in which I finally began reading it this past year. Given my previous readings concerning the history of slander, character assassination and defamation, I was drawn to this book, particularly, in light of the culture of authoritarianism and nationalism that is widespread today.

I read this work over a period of several months. It’s lucid and articulate and readable with an abundance of information.  The writing suggested the author was on a hermeneutical quest, so much so I had the feeling I was reading a book not only on the art of slander but also on the  theology and philosophy of slander.

Darnton is a brilliant thinker who enjoys research and it comes across in this intriguing study that at times reads like an 18th Century mystery. In summary, “Slander, libel, defamation, calumny, character assassination, mudslinging, scandalmongering, bad-mouthing, and billingsgate flourished as never before in eighteenth century France. Yet vilification has existed in most political system from antiquity to present.”

What one may learn in part is the devastating effects on the subsequent actions of a populace to the lies, slander and the belittling of one’s political opponents or anyone that is found disagreeable to one’s tastes. Narcissism and the ‘arrogance of power’ and wealth are symptoms of darker forces and misdeeds at work.

Darnton citations and bibliography are superlative, from police archives, to works of art, library archives, newspaper and letters from the period and so forth.  The reader might well ask, who did it and why? One can get lost in this book. I preferred it in a small dosages over a period of time.

It’s not for everyone but for those who want to gain an inside look at the nature of the art of slander in a particular period of history this work causes a pause when one thinks of the world today. And that is where I found historical and sociological value. I can only ponder what readers thought at the time. What did they think? And what was the result? The French Revolution comes to mind and Darnton covers it succinctly.

There are certainly more in-depth reviews I suspect but for this reader I scratched the surface of this fascinating study. It’s a useful reference tool.