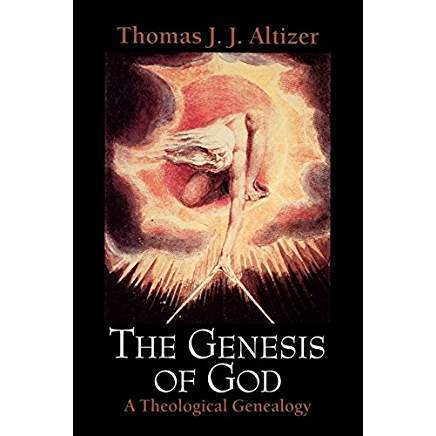 The Genesis of God, A Theological Genealogy by Thomas J.J. Altizer (1993)

As the author, an intellectually engaging, brilliant if not radical 20th century theologian, passed away on November 28, 2018, I thought I would offer my thoughts on this particular work and not the man’s reputation. The book has been alternatively sitting on my shelf or in a box with other books for close to twenty-five years in five different states. This is not your typical review. How could it be?

Having a substantial collection of works on Johann Faust and written about him I came across the words, “In  deinem Nichts hoff ich das All zu finden,” or “I hope to find the All in your Nothing.”  Altizer quotes Goethe’s Faust.

Allow me to step back, Altizer’s has a complicated mind with an intellectually provocative approach. He wants to discover the Christian God’s genesis and delves into theology, poetry, prose, philosophy, mythology, history and the culture of belief among other things.

This is not a thick book except in the fecund, nimble and erudite nature of Altizer’s ideas. It required a rereading at least for me.

He begins by saying that “Nothing is more forbidden today than thinking about God….”  For me that means we may attend church, listen to talk about the inerrancy of the words written in artificially anointed sacred works, yet we don’t truly “think” about God. That idea speaks to the fragility of our institutions, our self and truth. Truth being that which is based on the facts.

Altizer engages the reader in the thought process of the German philosophers, Hegel and Nietzsche. He notes that both of these men were philosophical and historical thinkers at once and each realized  a profound historical thinking that is a consequence of the death of God.

The author takes us on a thought-provoking journey into the human mind and how we perceive and deliberate on a concept like God. Man invents the name “God” or “Yahweh” etc., and then gives “God” attributes whether that God possesses them or not. Once you allow for attributes than manipulation of attributes beyond inspiration occurs.

The questions in one’s mind lead to more questions whether spiraling upwards or downwards. Was the crucifixion of Jesus of Nazareth in reality the crucifixion of God and the resurrection of freedom to be responsible human beings in an existential world on a fragile planet that clings to survival by its fingernails. Are we approaching an apocalyptic genesis? Or is “In the Beginning the beginning of an apocalyptic genesis,” a genesis that is the Absolute will of God?

How does one crucify a God, (the word God was invented by man)?  Did God die through the apocalyptic death of Christ? Was the death of God through the crucifixion of Jesus Christ indicative of the end and hope of humankind?

The book is provocative and opens the door to many questions. Thinking about God is problematic and extends beyond faith and what we perceive as reality. This book is for the theologically and philosophically curious.