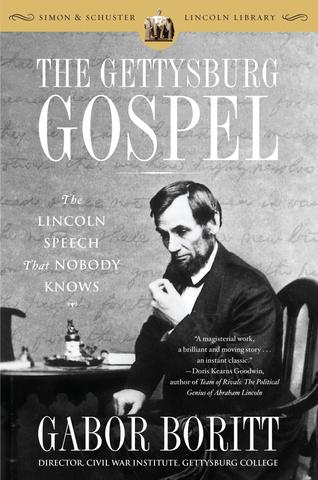 \The Gettysburg Gospel: The Lincoln Speech that Nobody Knows by Gabor Boritt (2006)

The author begins: “Gettysburg, July 4, 1863. Stench fills the air. Excrement from perhaps 180,000 men and more than 40,000 horses has been left behind in the area. There are thousands of flies, millions. Dead men barely covered in shallow graves. Seven thousand dead men? More likely close to 10,000. How many dead horses and mules? Three thousand, five? None buried. A nurse writes of carcasses “steaming in the sun.” The smell of putrid animal flesh mingles with the odor of human decay. It extends into the spirit of the people. War had come to them. Then it had gone and left the horror behind.”

This accessible scholarly work sat on my shelf for a dozen years before I reread it. Today I thought it might be worth revisiting. Some of the greatest addresses in the history of humankind were written over brief periods of time – hours and minutes the night before and morning of a given speech – when the rush of history is thrust upon them as witnesses to the history they find themselves in the midst of.

The odor of battle filled the air. The dying people in hospital tents – blacks, whites, Jews, Protestants, Catholics, atheists – a diverse group of religious and unaffiliated, yankee and confederate, men and women and children…how does a nurse or doctor among others decide which dying person is in more need of their service? Isn’t dying and death the great equalizer of which no amount of money or politics can effectuate a difference?

This is a story of Gettysburg before and after the battle. The people. The witnesses. The anger. The hurt. The intolerance. The ignorance. The wish for peace.

This work offers context to Lincoln’s Gettysburg address. It’s not perfect…it’s a slice of a complicated and ambiguous historical period…yet it’s insightful with voluminous notes and a substantial appendix. Well researched. Thought provoking. A good read. Man’s humanity and inhumanity. The Gettysburg address was like a poetic prayer evolving in Lincoln’s mind and perhaps only his mind could reveal even when afterwards there were those that questioned – what did he actually say or mean? Why were the people so silent after he spoke? Did they hear? Were they overcome or did they shrug their shoulders? They were silent.

The Gettysburg Address is where we find the accessible public intellectual, the savvy but humble politician and the compassionate poet in the form of Abraham Lincoln.

The Gettysburg Address (one of five copies penned and signed by A Lincoln in November 1863.)

Four score and seven years ago our fathers brought forth, upon this continent, a new nation, conceived in liberty, and dedicated to the proposition that “all men are created equal.” Now we are engaged in a great civil war, testing whether that nation, or any nation so conceived, and so dedicated, can long endure. We are met on a great battle-field of that war. We have come to dedicate a portion of it, as a final resting place for those who died here, that the nation might live. This we may, in all propriety do. But, in a larger sense, we can-not dedicate — we can-not consecrate — we can-not hallow, this ground– the brave men, living and dead, who struggled here, have hallowed it, far above our poor power to add or detract. The world will little note, nor long remember what we say here; while it can never forget what they did here. It is for us the living, rather, to be dedicated to the great task remaining before us — that, from these honored dead we take increased devotion to that cause for which they here, gave the last full measure of devotion — that we here highly resolve these dead shall not have died in vain; that this nation, under God, shall have a new birth of freedom, and that government of the people by the people for the people, shall not perish from the earth.