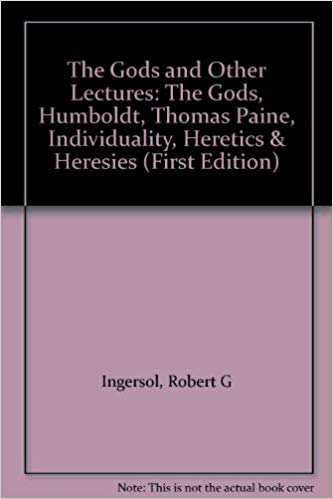 The Gods and Other Lectures: The Gods, Humboldt, Thomas Paine, Individuality, Heretics & Heresies  by Robert Ingersol (1874).

The kindle and paperback editions available offer easy access to his thoughts and are listed under The Gods and Other Lectures (2009).

The author was a prominent skeptic, humanist, orator and known as the Great Agnostic in the nineteenth century.

The essays in each chapter are divided between The Gods, Humboldt, Thomas Paine, Individuality and Heretics and Heresies.

Ingersol begins by stating that “each nation has created a God, and the God has always resembled its creator. He hated and loved what they hated and loved, and he was invariably on the side of those in power. Each God was intensely patriotic…and demanded praise, flattery and worship. Most of  them were pleased with sacrifice and the smell of innocent blood”…as it was “considered a divine perfume.”

Ingersol, a brilliant essayist and orator shows how these Gods demanded abject obedience. If the people disobeyed they were visited by famine, pestilence and others forms of violence and personal suffering. “Nothing is so pleasant to these gods as the butchery of unbelievers. Nothing so enrages them, even now, as to have someone deny their existence.”

The author speaks of the oppressed spirit and mind, the idea that we close our minds to ideas that might threaten our preconceived world view to the point of unleashing our hate through destructive acts to those who do not believe as we do. “I will pray for you” is an act of arrogance and condescension as if the person who speaks the words has a special access to truth. He writes – let us have the honesty and candor and say, that we don’t know. We are human and possess all the intellectual, emotional and physical limitations and foibles of being human.

The relevance of Ingersol’s thoughts can be viewed today in the news throughout the world in what humans do in the name of their God, religion and beliefs. The author questions the manipulation of the human mind through ritual and artificially designated sacred texts – if you repeat it enough people will believe there must be something to it, the lack of questioning and the downstream effects on politics, economics and human welfare – tolerance is giving every other human being the right you claim for yourself.

The author was a Civil War veteran, an ardent foe of slavery, a strong supporter of women’s suffrage, refuse to appreciate the abuse of children and spoke against nonsensical conformity among other social, political, religious and economic issues.

This is an excellent reference resource to Ingersol’s thoughts and like the other great skeptics  of the 19th century from Ralph Waldo Emerson, Henry David Thoreau and Frederick Douglass to name a few, whether the reader agrees with him or not, his lucid reasoning and insight gives pause about  personal beliefs and the machinations and intrigues of civilized society.