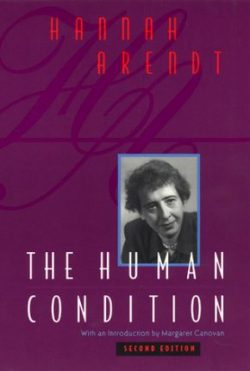 The Human Condition by Hannah Arendt (1958)

Hannah Arendt is an acquired taste. I periodically reread books that I’ve read in the past to see if I read something different in a work the second time around. Arendt’s writings in my opinion are intellectually stimulating from a political, philosophical and sociological perspective but once acquired one returns for a second helping.

Arendt is relentlessly thought-provoking regardless of what she tackles in the Human Condition she visits the active life as compared to the contemplative life. The influence of Greek philosophy on her thinking is evident.

In the Human Condition Arendt defines labor, work and action. My read is that labor is a natural condition of human life and the biological processes of the human body and the associated struggles the body endures. Work is viewed as providing an artificial world of things. Actions involves our individual political philosophies as played out every day whereby “men not Man live on the earth and inhabit the world” and in which actions take on existential meaning that is, responsibility for the self and the downstream effect of our decisions made on a daily basis.

In the end of her philosophical inquiry a paradox exists as the philosopher Cato observes about the human condition: “Never is he more active than when he does nothing. Never is he less alone than when he is by himself.”

In Arendt’s two volumes on Thinking and Willing, this reader comes away with a similar sense as this work on the Human Condition. It’s the obligation of humans with the resources to do so, to exist in the present moment while acknowledging the past and seeking a life of meaning beyond the illusions brought about by material gain.