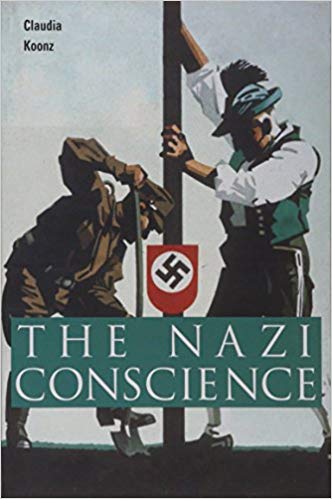 The Nazi Conscience by Claudia Koonz (2005)

My take:  Dr, Koonz’s work demonstrates how people can be indoctrinated and betray their ethical responsibility to their fellow humans. A provocative work about pre-war Germany, it’s also a tale of human nature. This was/is not the traditional historian view of Germany (1933-1939).

The Nazi Conscience demonstrates how the architects of the Nazi party formulated an authoritative and powerful adroitness and sense of their own moral righteousness that denounced outsiders. The author lays bare the infrastructure of Nazism and the process of persuading the ordinary person to their world view to such a degree that ethnic cleansing was perceived as ultimately a matter of survival. The ideology for example of racism was one that slowly strangled the moral responsibility of the majority of Germans by a minority of people. Those that agreed with the architects early on in a number of cases found they were the recipients of those very same injustices.

Divide and conquer is a cornerstone that becomes a seed that strangles the human conscience. The leader, in this case Adolf Hitler, appealed to the “collective virtue” of the Volk or the common people. The outsider was the alien. By allowing his opposition to divide their attention to the smaller venues of change he made his move toward dividing them through his words and action in varied formats of propaganda – the opposition were the leftists, socialists and communist camps along with Jews among others.

From 1933 to 1939, Nazi public culture was saturated with a blend of racial fear and ethnic pride labeled as “ethnic fundamentalism.” Atrocities occur when the people are numbed by the saturation of propaganda in all of its formats. The process evolved over the years. Pride and self-preservation took hold but not in the usual form, it was achieved through the policy architects reaching out to the people who feel oppressed in spirit and body with assurances, while oppressing those same people further.

Thought processes changed. The humane conscience was transformed and replaced with the ideas of we are indeed right and the “others” are wrong. Fears were exploited and people’s minds were manipulated for the greater good. The “community of us” as Hitler stated was an appreciation of the want of the Volk for coherence after years of struggle following WWI.

The lesson? One aspect of such an experience is that an evolution of ideas and a revolution in action sucks up everyone in the process of its dynamic. The chaos exploited through words and the concurrent and subsequent unethical acts are purposefully designed but the outcome is never fully understood even by the architects or the participants.

Dr. Koonz is a remarkable thinker and the history of Nazism is her primary field of historical scholarship. A solid, well-researched reference tool.