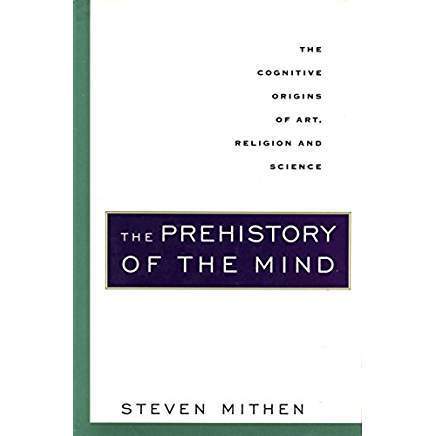 Prehistory of the Mind, The cognitive origins of art, religion and science.   by Steven Mithen  (1996)

This work is about the evolutionary process. The author demonstrates how the human mind is a product of human evolution not a supernatural creation. I would add, it includes the ability to be inspired and to inspire. The author, an archaeologist, displays his passion and scholarship in this study.

“The human mind is an intangible, an abstraction. In spite of more than a century of systematic study by psychologists and philosophers, it eludes definition and adequate description, let alone explanation.” So the author begins.

The mind has evolved over millions of years. What is the relationship between the brain and the mind? What caused spurts in development and growth of language, intelligence, cultural explosions, of the religious, artistic and scientific mind?

An intriguing study, though at times, naturally academic, the theme is the process –  the developing architecture of the human mind from hard wiring to patterns of behavior offers insights on how the human mind evolved. (For more information on consequences there are others one might consult…Steven Pinker is one of several.)

The author probes and seeks to understand relationships in the development of the human mind. He also steps back, examines the past, from a scientific perspective, the evolution and growth of the brain, including the multiple intelligences of the “early human mind,” the origins of art and religion, science and agriculture and sets the stage for what we experience now as the “modern mind.”

The primitive mind of “Hunter Gathers, whether Early or Modern Humans…were natural historians.”  Memory is key to the adaptability and progress of the human mind. Knowledge of the animals and plants around aided early humans to survive. “Natural history intelligence…evolved, at least, 1.8 million years ago.”

The author examines the archaeological evidence and the interrelations with social, cultural, artistic, religious and scientific behavior and how an event effected another. The more knowledge acquired, the more information transmitted. He looks at increasing cognitive fluidity – the process of the developing mind into “generalized type of intelligence” and “specialized type of intelligence.” The meanings of which perhaps are yet to be fully appreciated.  One piece of knowledge opens the door to another aspect of knowledge.  (See works of Colin Renfrew.)

This is a worthwhile, provocative, accessible study examining the prehistory of the human mind.