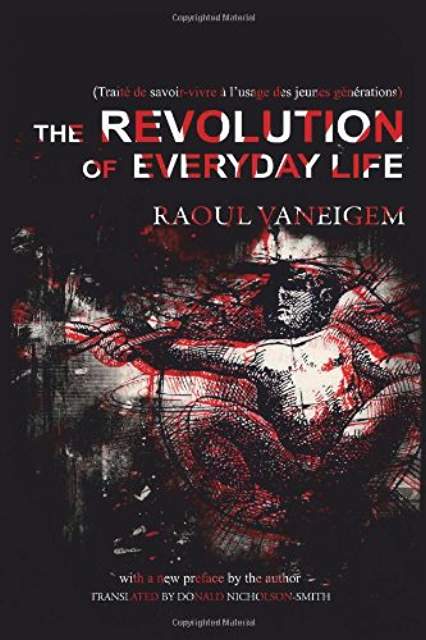 The Revolution of Everyday Life by Raoul Vaneigem  (Second Edition 2013 )

Thoughts: The first edition of this work was published in French in 1967. Vaneigem a Belgium writer attempts to absorb the world around him and leave no philosophical stone unturned. If his thoughts are to be categorized then libertarian socialist  (much misunderstood political philosophy) or situationist might be a way of looking at his ideas. To exist for him means to confront reality as we are faced with it on a daily basis.

Vaneigem writes, “Just as we distinguish in private life between what a man thinks and says about himself and what he really is and does, everyone has learned to distinguish the rhetoric and the messianic pretensions of political parties from their organization and real interests: what they think they are, from what they are. A man’s illusions about himself and others are not basically different from the illusions which groups, classes, and parties have about themselves. Indeed, they come from the same source: the dominant ideas, which are the ideas of the dominant class, even if they take an antagonistic form.”

The author’s examines history and digs deep into how people reason and why they reason the way they do. He finds no solace in the world of ism which is another form of manipulative thinking. “The world of isms, whether it envelops the whole of humanity or a single person, is never anything but a world drained of reality, a terribly real seduction by falsehood.”

Under the rubric of humiliation the author notes in part, “The economy of everyday life is based on a continuous exchange of humiliations and aggressive attitudes.”  He offers the example of the French philosopher Rousseau: “One day, when Rousseau was travelling through a crowded village, he was insulted by a yokel whose spirit delighted the crowd. Rousseau, confused and discountenanced, couldn’t think of a word in reply and was forced to take to his heels amidst the jeers of the crowd. By the time he had finally regained his composure and thought of a thousand possible retorts, any one of which would have silenced the joker once and for all, he was at two hours distance from the village.”

The author shares the following: “The endless minuet of humiliation and its response gives human relationships an obscene hobbling rhythm. In the ebb and flow of the crowds sucked in and crushed together by the coming and going of suburban trains, and coughed out into streets, offices, factories, there is nothing but timid retreats, brutal attacks, smirking faces and scratches delivered for no apparent reason. Soured by unwanted encounters, wine turns to vinegar in the mouth. Innocent and good-natured crowds? What a laugh!”

The aforementioned are mere snippets of a polemical style and a man whose brilliance is felt in each page. Are humans not more than objects? Or would capitalism disallow that objectivation? Are we no more than pawns to serve the capitalist enterprise dominated by the few? Under dictatorships and totalitarian regimes the slightest insult to the rulers meant death. How is that “death sentence” meted out today under authoritarian rulers?

The author delves into the illusions of everyday life and finds the antidote to be in the first step and that is an awareness of what one is engaged in order to begin to achieve individuality exterior to the commercialized nature of existence.

Veneigem is a provocative thinker whether one agrees with him or not. His ideas have a poetic appeal and may give one pause to reassess one’s thought processes and how we perceive the world around us.