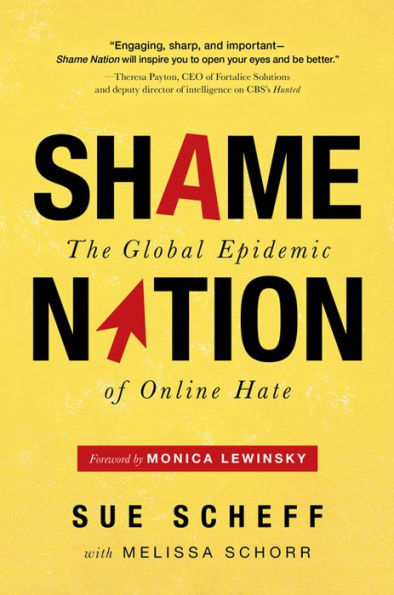 The Shame Nation: The Global Epidemic of Online Hate by Sue Scheff, Melissa Schorr (2017) With a forward by Monica Lewinski.

My take: This work serves as a thought-provoking idea resource to those who wish to counter online hate.

Anonymous hate filled trolls have ruined the lives and careers of people. Hate is a growing problem worldwide and instantly manifested on the Internet. Words do hurt and can effectuate a chain reaction from a single individual to a family and a community sucking out the marrow of a meaningful life and leaving a mere skeleton of hope. Hate is rooted in fear, insecurity and vanity.

The challenge is further complicated when hate is institutionalized and people are marginalized. Hate is a debilitating behavior. The perpetrators seem to bathe in self-entitled loathing of others, spreading disinformation and misinformation as if somehow such digital bullying and trolling elevates themselves in their own eyes and among their peers. They feel they are right and others who disagree with them are wrong. The evidence they present is not based on facts but emotion. Reality is distorted and lies and illusions replace it. Hate eats away at human dignity and feeds ignorance and arrogance. The downstream effects can be catastrophic. What kind of human being takes glee in the literal or figurative suicide of another human being?

Whether in the form of politicians patting people on the back while looking for the soft spot or those individuals or groups in search of greater power and control, the ultimate victims are both the individual and a civil society. Public shaming and bullying affects human empathy, trust and dignity. The authors show how to fight its devastating effects.

Though this work doesn’t cover presidential behavior the implications point in that direction. When the leader of a country spreads hate and purposeful disinformation then the fabric of democracy is torn and divisions are extremely difficult to stitch back together in a single generation.

The authors offer their insights to alleviate and counter public shaming…for hate is a symptom of a deeper social an intellectual malaise and the solution begins individually, within the family and collectively as a civil community or in a broader concept threaded within “civilization” itself.

Do to others what you would have them do to you is both a worthy and necessary daily aim for the sake of humanity.