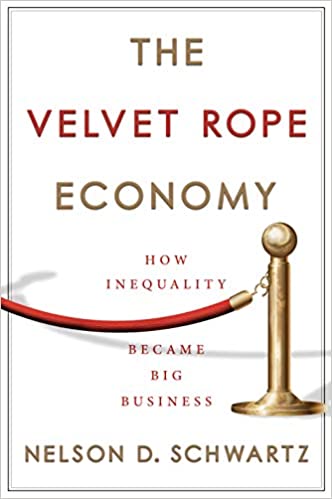 My thoughts on this insightful commentary. Though we have the “great equalizer” of a pandemic today one must assess the data and it’s far from being totaled. Still, if you are wealthy you have access to the best health care with a simple telephone call you know you are in a different world than the bulk of humanity. For the wealthiest there’s no waiting in line, for just about anything their heart desires they designed the system to favor their elitism. Yes we live in a oligarchy, where authoritarianism and inequality have become big business. It’s woven into daily life.  The author offers his well-researched insights and comments. Still this excellent work it’s just the tip of a deeper comment about humanity itself.

Money is made off the pain and suffering of those unable to survive on one job or a single income. And that’s how the wealthiest want it – a caste system mentality has developed. Their services are separate and In a crisis it becomes even more evident. The richest whether an investor or a televangelist, public celebrity or behind the scenes “celebrity”) see an opportunity to increase their wealth during crisis, war, pandemics, economic downturns, market manipulation – the list is long…and while the game of intrigue occurs the lines the wealthiest are waiting in are separate – in fact there are no lines…from airports to doctors to second or third homes or private yachts…the Velvet Rope.

The banking industry and investors who created the great recession over a decade ago never went to jail. In fact they were rewarded with bailouts as they were too big to fail. There were a few under President Obama that wanted to nationalize the banks in part much like President Roosevelt in the 1930s. Others used the word socialism to decry that strategy. But as  President Truman once made the obvious observation – police, fire, education, water and sewer systems, social security,  libraries, paved highways, etc. are forms of socialism.

Here’s the rub. The wealthiest have a lock on the money and power game and use it against those not members of their class – they have access to whatever they wish…the list appears endless. The architecture is purposeful. Become  successful  in your greed and you might be able to enter our inner circle.

Has anything changed over the centuries of human greed? No. Except today’s wealthiest are more rabid about class distinction and feel they are somehow superior human beings even when they drive pickup trucks to make it look like they are one of the common “folk” while others suggest descriptions such as “folks” rather than “people” is demeaning. It’s class distinction. And class distinction has its subtleties.

The most powerful and wealthiest realize what goes around does not always come around. Many wealthy people experience their death in peace after decades of abusing and manipulating others. Human equality and fairness of life doesn’t exist. The tragedy of capitalizing on unfairness and inequality I find it a crime against humanity itself.