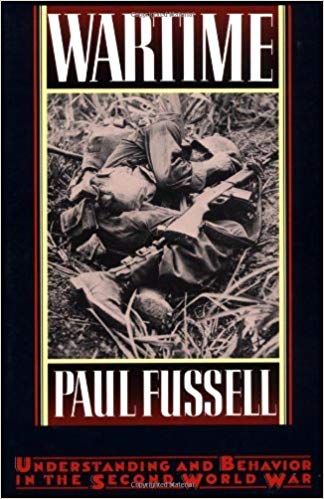 Wartime, Understanding and Behavior in the Second World War  by Paul Fussell (1989)

From a historical vantage point this may be one of the most illuminating books on WWII and war in general. Fussell, is an eminent historian and was an army lieutenant in WWII.

The author begins by stating: “This book is about the psychological and emotional culture of Americans and Britons during the Second World War. It is about the rationalizations and euphemisms people needed to deal with an unacceptable actuality from 1939 to 1945.”  The author goes on to state how the war was romanticized and sanitized “beyond recognition…by the sentimental, the loony patriotic, the ignorant and the bloodthirsty.”

The reality of war was another matter, soldiers drinking to overcome fear, defecating and pissing in their pants, searching for an arm that was blown off, crying and screaming in the night with eyes blinded, spitting up blood while bleeding to death, masturbating before others as they know they will die the next day, letters from soldiers in concentration camps with their tongues cut out, blunders from commanding officers costing needless lives….the sickening propaganda on all sides of the war as soldiers died for a cause ultimately other than their own. The soldier read the bible and poetry and sang songs  to stave off what seemed as the inevitable end of their life. Hope is abandoned if you are on the front line. Still the propaganda machine rolls on.

Coherence and meaning is lost in the heat of battle. Survival is the only goal…just to make it through another day with getting you head blown off. Death was not noble as if you were receiving a bullet in the heart…rather, most likely the bullet was aimed for your testicles.

To quote Norman Mailer: “you use the word shit so you can use the word noble, and you refuse to ignore the stupidity and barbarism and ignobility and poltroonery and filth of the real war so that it can flash out a bright signal in a dark time.”

The men who actually fought in World War II other than those who were part of the supply chain, knew first hand of the madness and the countless number of people dead in collateral damage. The ugly, utter cruelty of war gets lost in a number. a phrase, a quote while the annihilation of the spirit envelops the soldier in battle when face to face with the declared enemy.