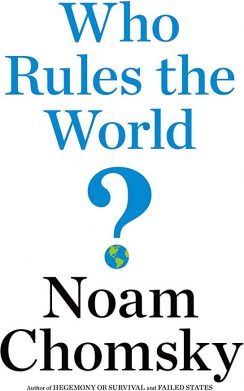 My take: Noam Chomsky is provocative and insightful, albeit selective and scathing, as he distills and articulates in readable fashion the manipulations of corporate America and the US government who have merged interests whereby all significant decisions are effectuated in large part by the wealthiest power brokers. His work for me is the most salient in its observations about economic, political and foreign policy objectives and misplaced human values and principles.

On a foreign policy level, with economic downstream effects, he explains how America has “exacerbated tensions, conflicts and disruptions that have shattered societies.” Making the world safe for American interests is an ugly fact based story of human greed and the accumulation of power.

Chomsky also states that “a strong case can be made that the primary concern of government is the security of state power from the population…as those who have spent time rummaging through archives should be aware, government secrecy is rarely motivated by a genuine need for security, but it definitely does serve to the keep the population in the dark.”

The effect of powerful interests in Chomsky’s mind is not so much who rules the world, as “what principles and values rule the world?”

This is a fascinating and relevant read especially with the increase in worldwide instability and the deliberate undermining of the US Constitution by the White House and absence of leadership in Congress independent of corporate America and how all but the wealthiest have become mere spectators in an increasingly polarized world.