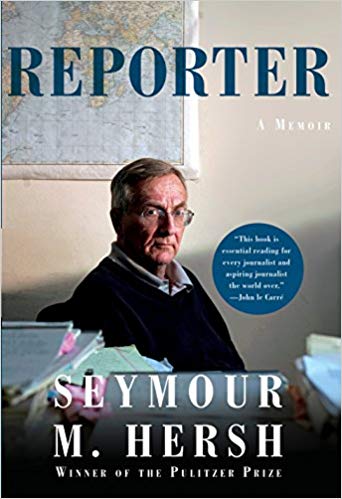 This is a fascinating and an exceptional memoir of a reporter’s reporter. Accuracy was essential in Hersh’s life that he learned early growing up on the south side of Chicago.  Striving for a sense of personal ethics affected his writing and observations. It was the story that he wanted to get right. He understood that transparency was always illusive. Having the time to research and write a story is a poignant reminder of journalism’s heyday considering today’s 24/7 social/news media cycle that reporters and correspondents face today. Digging deep and tackling stories others may not wish or have the time to research is a challenge that Hersh confronted head on.

There’s plenty of substance to this book – reporting demanded it whether it’s reporting the atrocities of Vietnam, the CIA subterfuge – undermining foreign governments and assassinations, the neocons (Neo-conservatives) and nationalists like Cheney, Rumsfeld and others like Kissinger who were not averse, to speaking from their teeth – to lie or obfuscate and disinform/mislead was a procedural matter. The private and abusive behavior of the presidents towards their own families is demonstrative of the effect of power on a “political leader.” The relationships, Hersh had With other journalists, is an intriguing glance into the man and his pursuit of a story, eg., Bob Woodward of the Washington Post is one of many examples. He called things as he saw them.

In exposing the truth, he ventured into dangerous territory on more than one occasion, the cruelty could be found if one chose to look – from the military, government, prisons, politicians, the list is long…the nature of humans is not always ethical or agreeable to one’s appetite but Hersh leaves few stones unturned when he’s after a story and his coverage shows it and he also shows how human he is.

This is a thought-provoking read.