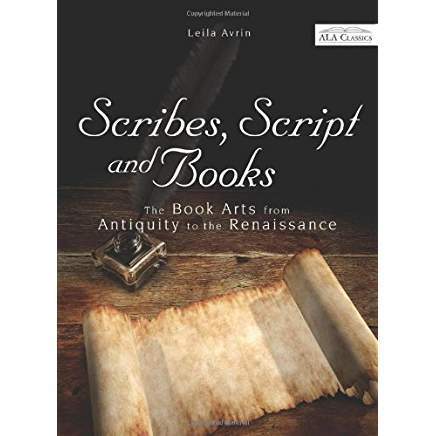 Scribes, Scripts and Books, The Book Arts from Antiquity to the Renaissance by Leila Arvin (1991)

This work effects curiosity. I took a course decades ago from Professor Leila Arvin. Her research was always intelligent, thoughtful, in-depth and complex with invaluable insights. In the preface of the work she sums up two idiosyncrasies she possesses: “chutzpah and courage of imperfection,” which she acknowledges was coined by the existential psychologist, Rollo May. And, I like imperfection.

I found the professor to be an eloquent, quirky and engaging intellectual. She states when she undertook this “work of passion” (my words) that “I have written this book to gather the scattered information on writing and the handmade book into a continuous history, whose progress has been determined by the principles of tradition and change.” Her aim was in effect …to demonstrate just how these principles “have determined the form of the Western book from ancient times to the age of printing.”

The overview is extensive. This is a scholarly reference tool, not a coffee table work, though it may appear as such. Whether it’s cuneiform tablets, the Hebrew book or Egyptian book, etc., there are details for the curious to consider in this age of digital books.

One example of a detail worth noting: The Egyptian book was the papyrus scroll. “In addition to serving as a writing surface, papyrus provided Egyptians with raw materials for boats, sails, shoes, clothing, rope, mats, fuel, even chewing gum and its roots were eaten by the poor.” Now this may be the interesting part for some readers, “The Egyptians leave us no instructions for transforming the papyrus plant into a writing surface.” Or at least no directions that archaeologists have found. The same could be said of other things such as pyramid building. One would think a high technology civilization would leave instructions. Then again it might require an engineer to translate an engineer’s how to instructions. Perhaps it was such common knowledge that people would shrug their shoulders and say even a child knows the answer regarding papyrus (my speculation).

Of course this is but one small example of the voluminous number of examples the author provides. Another example, is when she discusses the Greek and Hellenistic book and notes: “Just as Greek script came from the outside world, so did the major materials for making books. Ironically, but not illogically, while her literature endured, most classic Greek books did not.” Whoever has the raw material is in effect a major player.

Latin works and codices and so forth are also covered. The description of scribes, where and how they worked and the time spent in the scriptorium is insightful.

In summary, this remains an exceptional historical overview/reference tool and a path for further research. It’s the kind of work that you drink from, so to speak, to be savored and compared to other emerging wells of knowledge.