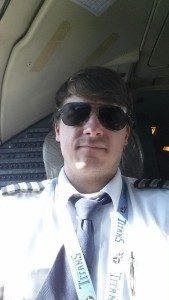 took his very first introduction to flight at McGhee Tyson Airport in Knoxville, TN, while he was in high school. He graduated from the University of Alaska with his aviation degree and during his schooling served as a pilot flying in the Alaskan Bush. His stint in Alaska also saw him flying the Cessna Caravan and the Beechcraft 1900 working in the air ambulance service. He eventually returned to the lower 48 to fly corporate jets including the Cessna Citation and Beechcraft jets. After an economic downturn he went into flying cargo for Fed Ex and is presently at Delta Connection flying the CRJ 700/900.

NP: From an airline pilot’s perspective, what are the paradigm shifts you have studied or experienced within the industry?

Townsend: A number of shifts in interstate commerce have existed since the early 1920s affecting every aspect of travel in our country. From the airline industry prospective the most notable was in 1978 with The Airline Deregulation Act.

NP: How would you describe the resulting shift?

Townsend: The shift toward deregulation was the elimination of government oversight and restrictions on air travel. At the end of the 1960’s the airline industry was growing at an ever-increasing rate that in turn created a high degree of complexity for the civil aeronautics board that was not envisioned. It was thought at the time that deregulation would resolve the complexity.

NP: What have been the downstream effects as a result of the shift towards further deregulations?

Townsend: Deregulation has opened many doors for cost savings to the consumer in the form of lower base fares and lower inflation cost. Capacity utilization through the use of the spoke-hub distribution paradigm increases efficiency and it created jobs for the local economy. That in turn led to greater competition.

NP: How would you portray the nature of the competition?

Townsend: Competition has developed from multiple carriers supplying service on the same routes, which kept cost low through average seat cost per mile. Markets have also seen the emergence of a new low-cost model airline. These airlines have low base cost fares but charge for extras like bag fees or early check in. To boost base line profits and compete for long-term passengers and revenue this has become the new norm to stay competitive against major air carriers with larger economies. That’s not to say there’s no challenges from a customer’s viewpoint as well as pilots and staff.

NP: What are some of the concerns that have been unfolding?

Townsend: Since the early 1990s airline jobs have increased by 20% but saw a sharp decline after 2001. Since that time wages have declined by at least 18% and at least 5% per year after that. With these changes the industry faces a staffing problem. Many airlines have been unable to staff flights and will face ongoing challenges in recruiting for the next decade.

In addition, customer satisfaction has seen a steady decline in recent years as airlines cut cost to remain competitive in this ever-changing market. With profit margins that fluctuate significantly from quarter to quarter in this highly competitive market we are constantly analyzing fuel consumption rates to maximize profitability. The next paradigm shift may be geared toward creating an adaptable balance in an uncertain future.