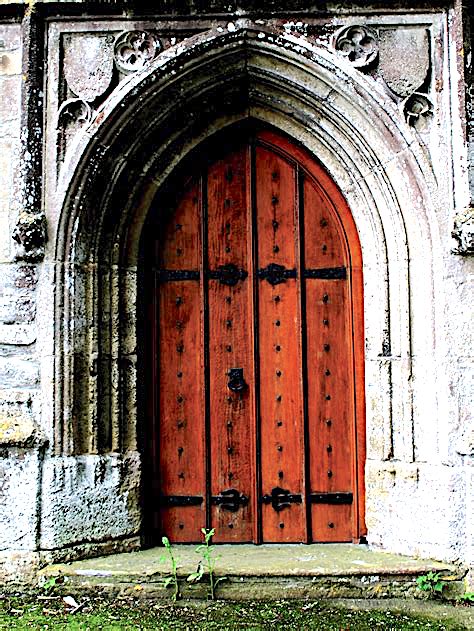 I think of the door both as a physical reality and as a metaphor. Its design, construction and composition reveal the thoughts of the designer about the context of entrance and access to a potentially mythic space.

In my voyages and treks to varied and disparate places, I have come across doors that enchant and intrigue my imagination. A scattering of them are primitive and date from the ancient through Dark and Medieval ages and forward, in Europe, Asia and the Middle East, and others more recent in the Americas.

A door whose design has been given detailed attention in its design is a symbolic and an allegorical passageway just as the most simply adorned entrance way. Whether in literature, history, mythology, psychology or theology, the door is a passage to an experience. In Craftsmen would spend weeks and even months on s specific door especially when it came to cathedrals, monasteries and temples. Such doors possess details layered in sacred meaning and imagination. To open the door and cross the threshold was to enter a sanctuary for the body and the mind. A door became a promise to something different.

The door represents an awareness of sanctuary and privacy. There are some doors that retain the whisper of the holy about them. It’s entry not to be opened with impunity but with graciousness. In different countries the color and design of the door was at times based on superstitions, rites of passage as well as a celebratory experience. The door also suggests security with hidden meanings. And, the home that’s viewed as an individual’s castle is steeped in human experience with the door, as it’s chief symbol.

The door that beckons becomes a passageway to a ”possibility.” Not knowing the nature of the possibility is the allure. The door becomes a transitional experience. I have found that arched doors have an emotional appeal, particularly when made of hardwood. Its gentle curve fits the human shape and flow. It’s easy to imagine the brain’s internal conversation with self and asking, “What wonders might lie beyond?”

Wood doors are organic. Prior to manufacturing of a wood door, the wood was alive and part of a tree that in turn depended on sunshine and rain to grow and mature. Inevitably, it’s about connection between what was organic to what is organic. It would be surreal if a tree had self-awareness of its fate and perhaps a taste of dramatic irony if the same tree that was used to form a door was also in part used in the process to make the paper money that purchased that same door.

Metal and glass doors or some combination of the two are an artificial reshaping of elements from the earth and make for advantageous commercial, residential and institutional use. They tend to be devised and manufactured primarily for security, fire, theft and related utilitarian purposes. Function and performance generally affect form. Unless provided with a measure of forethought such doors tend to be perfunctory and economically pragmatic and enhanced with manual or electronic locks. The person that enters through such doors may not render them much thought. But an illusive query remains.

Does the architecture of the door speak to the interior’s design and does that structure in turn affect how that interior is treated or utilized? The ubiquitous digital and infrared cameras and sound recording systems though not readily visible add to and affirm the real politics of un-privacy and the profane, in the polysemous nature of such entrances.

Yet there are doors that allow for the exterior natural environment to move smoothly and seamlessly into the interior and quietly say to the seeker without the need for signage – Welcome, nothing is asked of you except a considered conscience and a mutual trust.

The door becomes an opportunity and a passageway that can be revealing and enchanting. Opening a door invites chance. Once I open the door and move beyond the threshold, I’m exposed to another journey and a different frame of reference while entering mythic space.