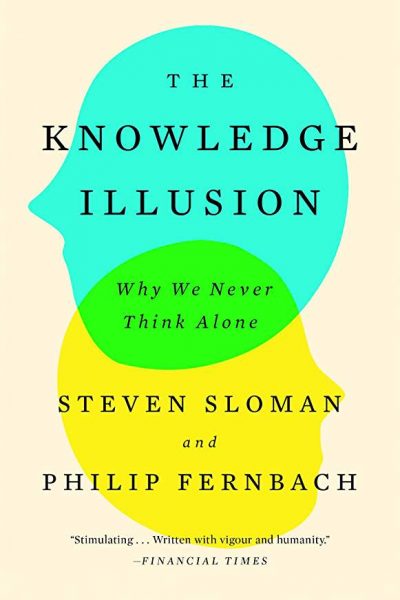 The Knowledge Illusion: Why We Never Think Alone by Steven Sloman, Philip Fernbach (2017)  Officially this work doesn’t hit the marketplace until the next week or so. And my opinion expressed here is just that – an opinion. Thinking is a complicated business. In “What is Called Thinking,” Martin Heidegger, the German philosopher once asked in a series of lectures in the early 1950s about the nature of this thing called thinking especially within the context of the individual’s experience and in relation to society.

Ignorance and the community of knowledge intrigue the cognitive scientist with a mathematical/computational mind. Between Sloman and Fernbach they have provided an insightful and stimulating read on how much the individual knows in relation to the community of knowledge. Not much. That would seem obvious on the surface but is it? For how much does or can an individual, no matter how brilliant, really know without a community? They can’t. And therein perhaps is an issue. I suppose within the framework of true believers (see Eric Hoffer’s works) that there is a belief that a person’s particular community possesses superior knowledge, regardless of the evidence. This is a “confirmation basis” where belief outweighs facts. Ignorance as bliss is dangerous and the authors warn of the delusion that any one individual faces when they think their thinking is derived at singularly. What is the nature of thinking within a particular community of believers? What does historical and sociological experience suggest?

The point being is for the reader to acquire intellectual humility as suggested by the authors.  Communities and individuals have a symbiotic relationship. We’re not so knowledgeable alone. Primitive people to modern societies have discovered they were most successful in survival in relationship to others.

Being intellectually humble especially during times of populism and authoritarianism would seem to be common sense. Unfortunately, it isn’t. If ignorant of specific subject matter how easy it to become saturated in the thinking of a community that’s willfully ignorant of evidence that is demonstrably at odds with a particular group or community thinking of which one is a member? How does the individual step away and question?

What do we mean by expertise? What is it based on?  If you are an “expert” on a given subject you are still limited by the context of you and your community’s experiences and thought processes. And the more your share in knowledge, based on evidence, the more you gain, rather than deluding yourself in thinking that you have the prerequisite knowledge as an individual “expert” that makes you superior in your grasp of a given subject.

Further, I would think that the individual that is abundantly narcissistic (read insecure) treads on volatile ground if he or she thinks they are the final authority and arbiter of the truth. Once we deceive our self in believing we are in great measure “the authority” what will it take to become intellectually and emotionally humble? Or will we? Is our ignorance too much of an agreeable place to live? To become knowledgeable might cost a person his or her accumulated power and competitive edge that perhaps was also at least based on “the ignorance of the other.”

As a historian and philosopher my thoughts wander back to Benjamin Franklin who reportedly observed while signing the Declaration of Independence, “We must all hang together, or most assuredly we shall all hang separately.” How many people did it take to think through America’s independence? The “Founders” were brilliant, courageous, self-confident, argumentative, angry and humble enough to share their knowledge in creating a new country and such characteristics are essential for discerning the truth rather than succumbing say to a “post-truth?

The thought processes in this work tantalize the imagination on one level and may seem obvious on another level. Cognitive scientists like to measure cognitive stuff. That’s gives this study of “ignorance and the community of knowledge” a strong foundation.

At least that’s my read and I’m sticking with it. That is, until I read, reread, commiserate and learn more.