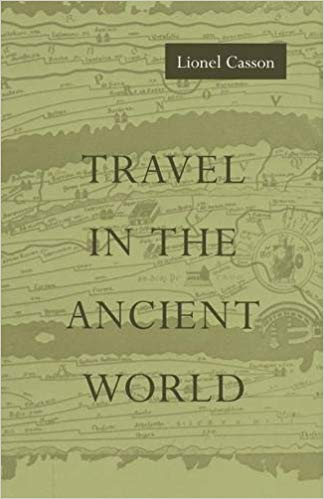 Travel in the Ancient World by Lionel Casson (1974)  I found this book gathering dust on my shelf and decided to reread. I am reminded of Gandalph the Grey’s admonition to Frodo in The Lord of the Rings by J.R.R. Tolkien: “It’s a dangerous business, Frodo, going out your door. You step on to the road, and if you don’t keep your feet, there’s no knowing where you might be swept off to.”

For most of human history people walked to their destination, forging new paths with subsequent people following their tracks until better ones were discovered. Eventually the donkey, horse, mule, oxen or boat assisted in the travel depending on the geographical location.

After the wheel was invented roads were built. Tribes and cultures exhibited various strengths in developing different means of travel, whether it was chariots and horses or carts pulled by donkeys and mules or boats with sails and oars. Through trade each tribe and culture borrowed from each other, improving upon the means of travel. As trade expanded so did travelers, writers and adventurers while the need for inns and places and buildings to visit grew.

Inns, bars and restaurants sprung up along the travel routes. The interior décor of the average inn was minimal and the female servants in a number of cases also served as prostitutes for the overnight guests. Interestingly, the ancients preferred eating in a reclined position as to sit up straight on a stool indicated a lower class and or the traveler was in a real hurry and did not wish to spend time at that inn. An interesting aside regarded meat. That is, it was not always readily available for the guest so innkeepers “cheated” the travelers. “The Roman physician Galen, for example, in describing human flesh as tasting very much like swine’s, adds that he knows of many innkeepers and butchers who have been caught selling human flesh as pork, and the diners were totally unaware of any difference.” The more selective of travelers preferred fish, vegetables, fruits and wine, which was watered down.

Casson’s in depth research primarily focuses on the western world especially the Levant from ancient Egypt to the sixth century of the Common Era. This is an engaging, very accessible work for those with a remote interest in ancient travel and the itineraries of the travelers whether business or pleasure and the exhilarating, exciting, dangerous and enlightening experiences encountered along the way. When one departed home it was with a prayer and an understanding that one might not return.